Our baby turns 7 months old on Monday, officially rattling my brain as to how fast…and slow (?) that went. Maybe all parents feel the same. The feeling of…I thought we just brought you home from the hospital? quickly followed by the feeling of…I can’t even remember what I did with my time before I had you? (15 blog posts a month, I guess that’s what).

I think we’ve seen the biggest change in Joaquin from month 1 to month 2, and now from month 6 to month 7. Before he turned 6 months old, he was a purely breastfed baby, now he’s attacking carrots, bananas, apples, zapallo (a South American mash-up of squash and pumpkin), and sweet potatoes. Next up on the list: pears.

He had a weird thing with texture when we first started feeding him food at the end of June, gagging constantly and turning his face all red. That was not really fun to watch. Though I myself am not a texture person, I still gag…as discreetly as possible…if there are chunks in my yogurt. You can’t catch me near a banana if it’s not in a smoothie. Mush nasty. So I understood the little guy. Actually, the first food he really tried was avocado. Chileans swear by them and we happened to have one in the house the day he turned 6 months old. He hated it. He gagged and coughed and I thought he would never eat real food ever and I would have to be attached to that cursed medela pump for the rest of my life. Obviously all normal, coherent, mom-of-her-first-baby thoughts.

Two weeks later we were in Colorado, and my mom was all about feeding him and chunking up his play-doh belly. “You’ve got to really get it up on the roof of his mouth” with a graphic motion of her thumb going behind her top front two teeth. Inside joke. My sister will laugh when she reads that. Well, he really got the hang of the eating thing spending so much time with my mom that week and a half, so now he is all about the food. He’s hardly turning his head away like he’s done, so I just keep giving him more food. I think I’ll hold off though now, since he’s had some crazy gas and pooped four times yesterday. I’m stuffing it in so fast it’s just leaking out the other end, kind of like those cabbage patch dolls that used to eat french fries and poop them out two minutes later.

In Chile at least, it’s more economical to buy fruits and vegetables and cook, blend and freeze the baby food in ice cube trays than it is to buy baby food in jars. One stupid jar is almost $1.25, and I bought four pears at the grocery store for $1.00 on Tuesday and filled six baby food jars. I felt so victorious. His food was originally free (me), now it’s holding pretty cheap. I wonder what the acceptable age for eating pureed foods is. 4? 5? Maybe not. But I wish. 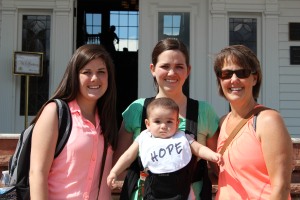 Joaquin also learned to sit up unassisted last week with Grandma Sue, Grandpa Dave and Aunt Julia. So though they live 5,000 miles away from us, they took part in a major baby milestone. Everyone was excited about that. He used to just flop over because I think his head weighs more than the rest of his body. I never really practiced at home with him, but my family was determined.

He’s overall a happy baby, content most of the time, and we’re blessed for that. However, he receives a less than passing grade for napping. They last maybe 40 minutes if he’s alone, an hour if he’s being held. But on Tuesday, he’s off to baby school and I’m praying every day that he’ll be able to adjust to their schedule and learn to sleep well by himself. I’m just such a sucker and will pick him up if he’s crying. Those tías at daycare are battle hardened and have probably seen it all. But I always have to remind myself, “it’s going to be alright”. This whole situation is more traumatizing for me than it is for him. He’ll probably get sick the first week he’s there, but I’ve accepted that it’s inevitable and we’ll deal with it when it happens.

Joaquin is a star traveler. This Colorado trip marks his second round trip international flight. He’s been on 9 airplanes in his 7 months of life. By his first birthday he’ll have been in 15 airplanes. So thank the Heavenly Father he is good on the planes. But oh my gosh, the kids behind us last Sunday on our way back to Santiago were this close to me locking them in the bathroom. I’ll save that gem of a story for a later date. Joaquin slept the whole time, from 30 minutes before we were set to take off at 8:30pm to when we landed at 6:30am, waking up to eat every two hours. 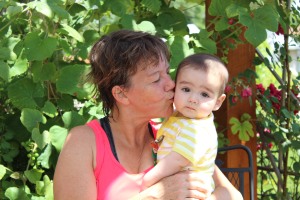 Andrés and I are really enjoying our little play-doh man, he’s smiley and cute and a blessing. He’s taught us (but mostly me) a lot about patience and adapting to difficult changes, things I’ve never been good at. Every day is different, and some are way better than others. For example when Tuesday night he slept from 10:30 to 7:30 without making a peep, then Wednesday night couldn’t sleep for more than one hour at a time. What was so drastically different from Tuesday to Wednesday? Babies man, who understands them.

I have been so absent from this site for so long. My sister commented that I started out two years ago writing 12-15 posts per month, now we down to…1? Maybe two if we’re lucky?

I won’t try to summarize everything that’s happened in the past month, but I’ll go into storytelling mode and give you a few.

Andrés, Joaquin and myself are currently sitting in the Dallas-Fort Worth airport terminal D (to be very specific) waiting for our flight back to Santiago. We’ve spent the past 10 days in beautiful Fort Collins, Colorado. El Oasis is a part of Globalscope which is part of Christian Missionary Fellowship (CMF), and Globalscope hosts an annual Celebration Conference with all the other Globalscope campus ministries throughout the world (8 total right now). This year it was hosted in Fort Collins. Last year it was in Tubingen, Germany, and I missed that last one so I was all, we’re going as a FAMILY and it’s going to be fun, dangit!

Then, my family heard we were going to be in the USA and were all…um, we’re coming to see your baby (and you of course, kind of), so it was a big family reunion out in the wild west. Let me tell you, it is a sad day today for me. My family was a huge help watching Joaquin while Andrés attended all of the conference events and I was able to attend some of them, and we even had plenty of time together as a family. It was a beautiful 10 days and I’m sorry to say goodbye to it. I was also able to meet all of the other missionaries in the other Globalscope fields that I had only been able to associate with a picture. Andrés and I heard a lot of great speakers hand us words of encouragement. It was an uplifting event. 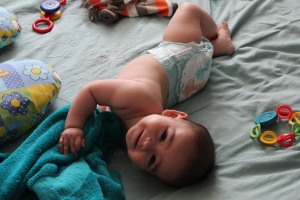 Joaquin is a seasoned traveler. He has been in more airplanes than most adults. We found out this afternoon that there isn’t an open seat on our flight to Santiago, so he’ll be a true “lap infant” on this flight. He’s had three trips to or from Santiago and we’ve always been blessed to have an extra seat to put his car seat or the front row to put him in the in-plane crib. So, we’re jipped on this leg and we’ll just have to deal with it.

I still haven’t started back at work for a reason which I will not get into right now, but my tentative return date is the end of July, or…next week. Dun dun dun. I will start bringing Joaquin to his daycare for an hour or two every day to get him accustomed to other humans of his size. He’s only really had experience with large humans, so he’ll have to learn to interact with small ones that are just as demanding as he is. I’m skeptical about daycare, but my work pays for it, so it is what it is. If it sucks, we’ll figure something else out. I pray that God gives us guidance as to what’s best for him, and helps us know if something is wrong, considering Joaquin can’t speak for himself yet if something isn’t right. I think that makes me the most nervous. But, like I’ve described it to some people, I think this whole “going back to work and leaving my baby with strangers” thing is like jumping into a cold pool. I’ve been putting my toes in the water feeling how cold it is and am stalling on making the plunge, but once I jump in, I’ll get used to the water in a few minutes (or maybe more than a few minutes).

In June I was in full World Cup mode, watching two or three games a day, every day. The Chile-Brazil game was a heartbreaker. I was with Andrés family, and I can tell you all that I saw more than one grown man cry at the end of that game. Chileans will live with the grief of the “almost goal” for years to come. For those who didn’t see or don’t remember, one of the Chilean forwards hit the goalpost and it bounced out in the last minute of regulation, when it had all the possibility of bouncing in. It is what it is, we’ll see what happens four years from now. For now, they’ll live in agony for a while.

So, here’s to breaking my silence, I hope to be more present on this sliver of internet space.

From the bottom of the world...