I spent yesterday morning in the hospital lab taking the “pregnancy diabetes test”. Which thankfully I don’t have. Unfortunately telling the doctor, “yeah, this kind of thing doesn’t run in our family” does not give me a ‘get out of the lab free card’. As with any hospital, or country for that matter, rules are different. I was prepared for a 1 hour test because that’s what I had read about. I asked my doctor what it was like assuming it was a 1 hour test, and if I failed that one I would take a longer 3 hour test (again…solely information based on what I had read on the internet). So I asked him what happens if I fail the first test, when I would take the second one, and he’s like (in my best translation possible), “Silly gringa, if you fail the test, the first test, there is no second test. If you don’t pass the first test, you’re a FAILURE”. Maybe that’s not what he said, but he might as well have. And it made me all nervous, which I shouldn’t have been because like I said, gestational diabetes is not something my fam is known for. We’re known for a lot of OTHER things, but that’s not one of them.

So, off to the lab I went to see if I could get it done that day. Wrong. I needed to fast for 9-11 hours in advance. I didn’t think they’d buy it if I told them that I just happened to have fasted last night…you know, random fasting for personal reasons…so I decided to come back later.

Flash forward to yesterday morning, and as I’m waiting for them to call my name, I’m more nervous about the blood draw than drinking that sugary crap everyone complains about. No food in stomach=blood drawn=Amy fainting. It’s happened 3 times…or basically every time I get told I have to fast and have blood drawn. Needles do not bother me, but it sure does bother my blood pressure which drops significantly and I end up collapsed in a chair waking up to a bunch of nurses holding food in my face. It’s surprising I’m not anemic, given my coloring (Colgate Brilliant White) and my history of passing out. My body just likes having food in its stomach, which I say is 100% reasonable! Anyways, all of these previous experiences are passing through my head and I hear my name called. Well, I hear “Ahh-mee” called. That’s my fancy Chilean name. Whenever we go in for our monthly checkups at the OB, my doctor always has to make the tough call of calling me into his office over the loudspeaker by my first name (pronounced incorrectly) or by my middle name, which is much easier for Chileans to pronounce. I will start making a game of it. In September I was Ah-mee. In July and August I was Elizabeth. I’m thinking October is going to be another Ah-mee month. Maybe by the time I have to push a baby out of my nether region, we will finally be on a correctly-pronounced-first-name-basis. I’m hopeful.

Right, so nurse tech and Ah-mee walk into the blood-extraction room (what else could that room possibly be called), and we sit down and she asks me to repeat my name. “Amy”, I say. “Ok”, she says, “because here on your sheet the receptionist wrote to ask about your name”. I don’t even know what to make of this. “Um..well, Amy is my first name, and Elizabeth is my middle name”. The best conclusion I could come up with was that the receptionist thought that Elizabeth was actually my first name, and Amy was just a typographical error or some kind of formal title, like “Sir” or “Duchess” or “Lord” or “Her Royal Highness”. As if she thought I was “Lady Elizabeth” but in my language it is spelled “Amy Elizabeth”. I left it at thinking the receptionist thought I was royalty and took it as a compliment.

She draws my blood and I don’t faint (one for two of the day) in order to get a baseline reading. Then I have to chug the orange drink. In my best description, it tasted like it came from an open bottle of Fanta that had been sitting out for two days. Not unbearable. She handed it to me in a bottle and asked if I wanted to pour it into a cup. No man, I’ll take it straight like a boss. Except for the yuck aftertaste and not being allowed to move from the waiting room for two hours, it was very survivable (first world complaints). Two hours later, I got blood drawn again and I don’t faint or even feel lightheaded and I high-five myself in my head for this mini-mountain I conquered. The nurse tech asks me if I’m hungry, nauseous, tired, or feel like I can’t leave yet. I tell her I’m tired, crossing my fingers she’ll let me take a nap like I used to do when I was in high school, but no such luck.

I head to work with my granola bar in hand, happy that baby got me through this test with no problems.

After work I stop over at the mall because I need to find some longer short sleeve shirts. It’s 80 degrees today, but I would assume 0% of the world population wants to see a seven month pregnant woman in a t-shirt that only reaches to her belly button. Saving a lot of people the desire to be blinded, I bought some new shirts and later wandered into the baby section. Gender neutral shopping is rough! I have no problem waiting to find out the sex of our baby until the big day, but I fear this kid may come home wrapped in swaddling cloths because baby clothes here are blue or pink. Chile is not supporting our find-out-the-gender-at-the-last-moment-decision! Though, H&M has helped support us a bit better.

Yeah, the pants are pretty boring, but they’re so tiny and cute!! And I look at the positive in two ways. 1. Our child will have clothes to wear for at least a week of his/her life until we can get out and buy him/her some more gender appropriate clothing, and 2. I think if we knew the sex, I would be buying way more clothes than is necessary for a newborn. I mean, I think if you watch them for an hour straight, you can actually see them physically outgrowing all of their clothes!

It’s a Wednesday and why am I not at work? It’s September 18th, of course! Maybe you remember my post about holidays from last year, but September 18th is Chile’s Independence Day and September 19th is “Army Day”. I’m still translating it to that because it seems like the most appropriate name for that day. And that’s today…and tomorrow. On top of that, a few years ago the president declared the 17th or the 20th as a holiday if the 17th is a Monday or the 20th is a Friday, and luckily this first year on the job in Chile the 20th happens to be on a Friday. Hip Hip Hooray!!! Though, in future years if the 18th and 19th is on a Saturday and a Sunday, Chile’s workforce is SOL.

This afternoon we were at family’s house celebrating Independence Day…eating lots of food, seeing a lot of family, spending a lot of time with the kiddies. They keep getting cuter. 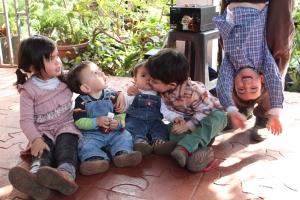 I especially like the above photo because Ignacio is hanging upside down and Maximo is giving some serious cousin love to Clara, which Diego and Martina are just observing the weirdness/cuteness.

Andres’ aunt Paula was visiting from the States with youngest daughter Clara for a very short amount of time to basically say goodbye to her mom, Andres’ grandma. She’s had multiple strokes starting last March, and we’re not sure how much longer she’ll be with us. We’re praying that God either makes a change in her physical and mental state or that He decides to call her home soon. It seems to Andres and me that the latter would be best, but that’s obviously not something we can control. After her blood pressure lowered and her breathing lessened last week, Paula scrambled to find a standby ticket to Chile to come see her mom. But on the plus side, I got to hang out with this cutie!!

She officially wins the happiest baby award. This kid was passed at least 50 times from family member to other family member and I never heard her cry once. I have a leery feeling that not all babies act like her, and mine may not fall into that category either. For now I can only hope.

The rest of the week is showing a heavy forecast of food and celebrations. Tomorrow is El Oasis’ annual Independence week fonda that raises money for missions. This year the money raised will be used to support the 2nd annual El Oasis trip to Caranavi, Bolivia. In previous years it went to specific students going abroad for 2 months to serve in one of the other “El Oasis'” in the world. Then on Friday we’ll probably go to one of the other fondas held by the different comunas in Santiago. Saturday and Sunday will probably be used to digest the food we ate this week.