As most of you may know from reading some of my more recent posts, my family is in the middle of Andrés’ immigrant visa process. I think that this topic is kind of fuzzy for a lot of people, especially those that are unfamiliar with the system or people part of one-country families.

This will be an especially informative post, so hold on to your chairs. This is about to get mind-blowingly exciting.

Here are some of the most frequent questions people ask me:

Is Joaquin Chilean? Or is he American? WHAT IS HE?!?

Joaquin is Chilean-American. He acquired both Chilean and US citizenship at birth as a result of his mom and dad’s respective citizenships. Result: thick-haired, easy-on-the-eyes, tans easily, latino-gringo baby. You can read all about it here.

No, Andrés does not have a green card. We are applying for his “Green Card” here in Chile via the Immigrant Visa. He must be issued the immigrant visa in Chile before he receives his “Green Card”. The “Green Card” is an informal term whose official name is Permanent Residency. The Green Card got its nickname because the actual permanent residency card that the US government issues immigrants is green. Deep. 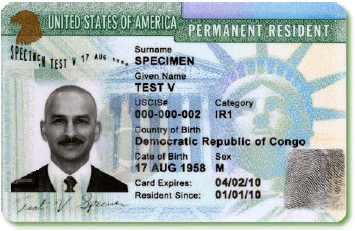 FYI: This is not my husband. Thank goodness.

Why don’t you all move to the USA and then apply for his Green Card?

Because it is illegal. If we move to the USA, Andrés would enter as a tourist, but he and I would both know that we plan to stay there and then apply for his permanent residency. This is committing immigration fraud and he would be subject to deportation. No thanks.

However, this is the route that I assume a lot of people take, because they don’t want to wait a year to be issued a visa, and they may also believe that it would be difficult for the US Government to prove that there was an intent to immigrate. This is a risk that Andrés and I, responsible human beings, are not interested in taking.

Of course, there are circumstances where someone may enter on a visa other than an immigration visa (student, tourist, business, etc), and they either meet their significant other or plans change at no fault of their own. Then they may “adjust status” and apply for permanent residency once they are already in the USA. But again, this raises Uncle Sam’s eyebrows and the process may be significantly more complicated for someone in this case. Plus, Andrés and I both know that we would not have a case like this. We know we are wanting to stay, so therefore he must apply from outside of the USA.

This rule varies from country to country. I entered Chile as a tourist in August 2012 (after already getting married to Andrés a month earlier), and once I was in Chile, I applied for my residency. In Chile, this is completely legal.

Doesn’t Andrés get a Green Card because he’s married to a US Citizen?

Yes, but he still has to apply and pay for it.  If you are the spouse or an unmarried child under 21 years old of a US Citizen, there is no limit to the amount of immigrant visas that can be issued. The government puts number limits on issuing visas for people falling into other categories that are applying for residency, such as parents of a US Citizen or unmarried children under 21 years old of a US Permanent Resident, among other examples. For example, there may be only 10,000 immigrant visas available to parents of US citizens in 2015. Some people in these cases wait years and years before it’s their turn.

So, Andrés technically doesn’t have to wait in line to be issued an immigrant visa, but he still has to go through the entire application process and pay the government all sorts of cash money. And, if everything goes well, he still will have a final visa interview at the US Embassy in Santiago. If they approve, they will put the immigration visa stamp in his passport, and he is allowed to enter the USA as an immigrant. The immigration officer at the airport will have the final final final final final final say if Andrés can be a permanent resident (“Green Card Holder”). Once (not if) he passes through this stage, his “Green Card” will be mailed to him at the US address he provides.

What can you do with a Green Card?

A US Permanent Resident has basically all of the rights of a US Citizen, except that their condition as a Permanent Resident may expire if they leave the USA for a certain amount of time. I will never lose my US citizenship no matter how long I am living outside the USA, but Andrés could lose his status as a US permanent resident.

Permanent Residents are allowed to work, have a SSN, pay taxes (hooray) and have all of the rights and responsibilities that Citizens do.

Being that Andrés is a spouse of a US Citizen and under certain conditions, he may be able to apply for US Citizenship in a little as three years after being granted permanent residence status.

Wouldn’t he have to give up his Chilean Citizenship?

No. Chile will not obligate him to give up his Chilean citizenship simply because he would be acquiring another country’s citizenship. These laws vary from country to country. Some countries make you relinquish your citizenship. Sad face.

There are many other loops and turns and twists to this adventure we’ve undertaken, but I hope this makes things a little bit clearer into our journey. The immigration journey is long, tiring and frequently painful for a lot of families. At least the three of us can stay together through all of it.

From the bottom of the world...